Are you planning an intimate afternoon tea at home? Why not give it a French twist? This quartet of French afternoon tea sandwiches is the perfect start to your event! Based on traditional French salads and baguettes, these 4 simple recipes are delicious and very, very French. Bon appetit!

Ease: Simple. They are still sandwiches, even if they are French.

Cons: Choosing which one to eat first.

Do the French have afternoon tea?

The French don’t really do afternoon tea, at least not in the British sense. They do not sit down with a pot of tea, finger sandwiches, a French equivalent of scones with preserves and clotted cream and small cakes (though they do have a wonderful selection of small cakes and pastries, as we will show in a few weeks).

However, French people traditionally eat dinner later – around 8 pm – so they are known to have something in the afternoon. This is called Le Goûter.

Le Goûter comes from the french verb, goîter, which means “to taste”. It is an informal small meal (it is not considered snacking!), almost always sweet, eaten mid-afternoon. Common foods include crêpes, cakes or pastries, or a pain au chocolat handed to a child on their way to an after-school activity.

Even though the French don’t really do afternoon tea, they do do sandwiches. And they do them well.

Many French sandwiches are surprisingly simple. In fact, the most popular sandwich is the baguette jambon beurre or “Parisien”, which is a baguette spread with butter and topped with ham. These account for nearly 65% of all sandwiches sold per year in France (that’s around 830 million sandwiches!).

While we could write some details on choosing the right butter for this sandwich, we decided it was too simple for our French afternoon tea.

The other top French sandwiches are:

This little tartine – or open-faced sandwich – is inspired by a classic and very popular French salad. It is a delightful mix of tart, sweet and earthy and was my mother-in-law’s favourite.

It doesn’t really matter what type of bread you use for these delicious French afternoon tea sandwiches. We cut slices from a baguette, which were the perfect size. It also meant we didn’t have to buy too many different types of bread.

The important part of this recipe is the cheese. There are lots of types of goats cheese, but what you want is an aged chèvre. While they are probably delicious, you don’t want one with blueberries and thyme or cranberry and cinnamon or cognac. You are looking for a goats cheese similar to this one. Instead, look for something like this Cyprus Grove chèvre.

If you can’t get chèvre, use another soft, aged, French cheese, like camembert or brie.

The caramel is simple and delicious and only takes a few minutes to make. If you are like me and hate honey, switch up the honey for maple syrup.

Just one tip: Don’t make the caramelised walnuts too far in advance! As they cool, the caramel goes hard and will stick to the saucepan. Instead, spread it out on some parchment paper as soon as it is cooked. This will make it easier to break up the caramel into small pieces, perfect for your tartines.

This tartine, or open-faced sandwich is very simple. It’s a French favourite, though we’re making ours a little differently.

Normally, when the French make a pâté cornichon tartine, they use a pork pâté (or pâté de campagne) that is much thicker and not as fine as the pâté we used. Our duck liver pâté (foie gras), which is more like a paste or mousse, the French pâté is more like an elegant meatloaf in consistency.

There are recipes to make the french pâté de campagne. I’ve had it before and it is delicious. However, I did not have time to make some this time. Nor, probably, will you.

Foie gras is very expensive and not necessary for these little tartines. Most supermarkets sell a much cheaper version of duck liver pâté. If you can’t get duck liver pâté, or it is too expensive, try pork liver pâté instead.

Duck liver pâté is often served with caramelised figs or even fresh figs. I couldn’t find figs at our supermarket and had enough caramelisation with our other sandwiches.

Cornichons are a small, pickled cucumbers – Perkins – normally around three centimeters in length. You can cut the gherkin if you wish (for presentation) or simply place it one top.

For simplicity, I used slices of baguette. You can use any bread that you like. I already had the oven on, so I just toasted the slices in the oven with the tiniest drizzle of olive oil. If you prefer, use a toaster. I think the tiniest amount of oil adds to the taste here, though it is a personal preference.

The pan bagnat is perhaps the most traditional (and popular) sandwich of our four French afternoon tea sandwiches. It is basically a salade niçoise in a roll and the both come from the Provence.

The ingredients for pan bagnat vary a little. I looked at numerous recipes in English and French. However, there are some common ingredients:

The pan bagnat also includes tuna or anchovies or both. I can’t do anchovies at all, so I used tuna. It does not matter if you use a tin of tuna in sunflower oil or in its own brine: drain well. You could also use tuna steaks if you wish, but we were going for the more cost-effective option.

Some recipes call for the use of lettuce, normally romaine, but I liked the suggestion of celery leaves and the subtle difference in taste it gives to the sandwich. You can make your own decision.

A traditional pan bagnat will not use mayonnaise or anything creamy, so don’t get any ideas about adding cream cheese or cheese or any other dressing.

We used a baguette, because that is what we had. Traditionally, a pan bagnat would be served in a large round bread roll; in this case you would cut it into quarters.

The most important thing is to use fresh ingredients and good quality tuna.

The only negative side to the pan bagnat is that it is rather messy to eat and tends to lose bits as you try and eat it. It is great for a rustic afternoon tea, but not as suitable if you want a chic French afternoon tea. I will definitely be making it as a sandwich, but hesitate before serving it for afternoon tea (especially as we have so many other traditional and fruity options!

For many French people, this sandwich would be sacrilegious. Croissants are a breakfast food, not an afternoon tea element. Indeed, this recipe would be perfect for breakfast too (if you can handle mustard for breakfast).

For me, croissants are the perfect way to make a simple ham and cheese sandwich French. It is our homage to the croquet monsieur, without the mess and need to use a knife and fork (which is just not done for afternoon tea).

This was Peter’s favourite of the four French afternoon tea sandwiches, closely followed by the chèvre chaud.

I used maple syrup for the glaze, because I don’t like honey. I had visions of maple glazed hams and knew it would taste good, though perhaps that should be part of a Canadian afternoon tea sandwiches… If you prefer honey, use that instead of maple syrup.

The only tip we have is not to get bake at home croissants. They tend to be smaller and doughier, which would not work as well for this recipe. You do not have to drive three towns over to get the best croissants in the area! We just got ours from our local petrol station (though you might not have that option where you are).

If you can only get small croissants, use one per person.

What should you serve with these French afternoon tea sandwiches?

For a typical French savoury dish, serve them with some fresh, warm quiche (recipe coming next week).

There is no real French equivalent of scones, so we’ve opted to serve them with a selection of small cakes. Petit fours should be on the menu, together with mille-feuille (recipe coming soon). We’ll be sharing a couple of other options, too.

And instead of tea, serve coffee – made in a French press, of course!

If you prefer, change the honey for maple syrup (and vice versa) on the tartines de chèvre chaud au miel and the ham and cheese croissants.

If you are planning to hold a French afternoon tea, this quartet of French afternoon tea sandwiches is a great place to start. Based on traditional French salads and baguettes, these simple recipes are delicious and very, very French and bound to be a hit. You’ll want to make them again, and not just for afternoon tea!

Why not give your afternoon tea a French twist?

You’ll love these posts too!

How to make Royal fruit scones truly fit for a queen 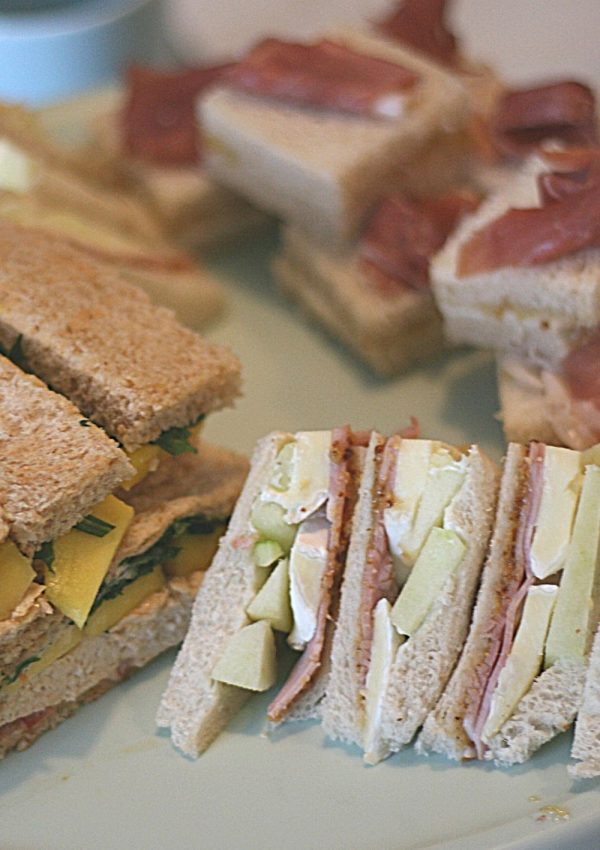