This year, the Oktoberfest in Munich has been cancelled. The mayor will not be calling “O’Zapft is” once the first keg is tapped. There is no need to dress up in Dirndl and Lederhosen. It is also unlikely that the seven million litres of beer that has been brewed will be drunk. So why not use some of that beer to make Oktoberfest cupcakes to celebrate at home?

I will let you in on a secret: I hate beer. I do not like the smell or the taste, or the aftertaste. I have not had one of these cupcakes and had to ask my mother-in-law and Peter to taste-test the batter and caramel for me. Peter even convinced me to try some of the caramel because “it doesn’t really taste like beer”. It does have the aftertaste though!

Despite not eating any myself, I can assure you that these Oktoberfest cupcakes – beer cupcakes with beer caramel, vanilla frosting, beer caramel drizzle and a chocolate-dipped pretzel – are very tasty.

Peter is a member of two fantasy football leagues (American football). This year, the ‘Draft Day’ for one of those leagues was held predominantly at our house.

If you haven’t experienced a fantasy football league draft day before, imagine about 10 grown men (the “owners”), sitting round a table, each with their laptop or tablet of choice, choosing their players online one-by-one when it is their team’s turn. Of course, they need beer or cola to help with the nerves and snacks.

To celebrate the end of a successful draft, they devoured these Oktoberfest cupcakes while boasting about their picks. The compliments for the cupcakes were flowing quicker than the trash talk about the upcoming season!

What is Oktoberfest beer?

According to custom, the six Munich breweries – Augustiner, Hacker-Pschorr, Hofbräu, Löwenbräu, Paulana and Spaten – are the only breweries, whose beer may be served on the Wiesn (at the Oktoberfest). Logically, Oktoberfest beer is the beer brewed by these breweries specifically for sale at the Oktoberfest. It would have taken place from 19 September to 4 October 2020.

This beer is now on sale throughout Germany and may be for a while yet. Of course, this makes it the perfect ingredient to use in our Oktoberfest cupcakes!

Oktoberfest beer is a Helles that is brewed especially for the Oktoberfest. If you can’t get Oktoberfest beer, use your favourite German-style Helles, or a pale larger or all-malt pilsner instead. You should only need around 400 mL, so make sure you use good quality beer.

In this recipe, we used the Spaten Oktoberfest beer in these beer cupcakes with beer caramel.

Tips for the perfect Oktoberfest cupcakes

The cupcakes recipe is actually loosely based on my favourite moist chocolate cupcakes recipe – just without the cocoa. I knew I wanted to add a reasonable amount of beer so that you can taste it and this recipe yields the runniest cupcake batter of all my recipes (it has 1 cup of coffee and 1 cup buttermilk for double the number of cupcakes).

I’ll say it again: choose a good quality beer. If you can, use a German-style Helles (check out local craft beer suppliers). If you can’t find a Helles, use a pale larger or an all-malt pilsner. Preferably, it is a beer you would like to drink. This is not the recipe to use the last of your Guinness!

For the beer caramel

The caramel is based on the tea caramel sauce I used recently in our rooibos ice cream recipe. I just swapped the tea for beer.

When making the caramel, be careful not to burn the sugar. If you do burn the sugar (and just a little bit of distraction is enough to do it), you can throw it all away and start again as it will ruin the taste.

Please also be careful when adding the butter to the caramel. The sugar will be super hot and the addition of cold butter will make it spit and bubble. Yes, this is not one to make with the kids.

If you prefer salted caramel, add one teaspoon of (rock) salt after you have added the cream and simmered. Stir well.

The beer taste is quite mild in the caramel, but you can still definitely taste it in the aftertaste.

You can make the caramel in advance. Just keep it in an airtight container so that a ‘skin’ doesn’t form on top.

For the vanilla frosting

Try not to make your frosting too sweet. It it is too cloyingly sweet it will overpower the subtle notes of the beer. If you find your frosting is too runny, put it in the refrigerator for about 20 minutes to make the butter and chocolate set as this will firm up the frosting. You can then check to see whether you need to add more icing sugar.

For the chocolate-dipped pretzels

Finally, don’t put the chocolate-dipped pretzels in the refrigerator or anywhere ‘moist’ for the chocolate to harden. It should be cool, but not too humid or your pretzels will go soggy (and you really do not want soggy pretzels). 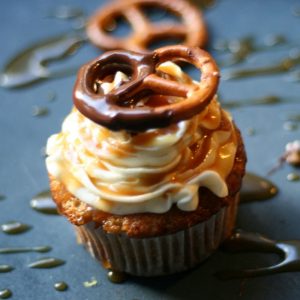 For the beer cupcakes

For the beer caramel

We use unsalted butter in our recipes unless otherwise indicated. If you are using salted butter, taste test before adding any salt. We used Oktoberfest beer, a beer brewed by one of the six Munich breweries specifically for the Oktoberfest. If you can’t get Oktoberfest beer (because it is the wrong time of year or you don’t live in Germany), use any German-style Helles or a pale larger or pilsner.

Do you need a reason to make these Oktoberfest cupcakes?

These beer cupcakes with beer caramel are great for celebrating the Oktoberfest, football, German heritage or a blokes lunch or brunch. They are perfect for Autumn, which is good because they are the first of our Autumn cupcakes for this year!

Be sure to come back for our other Autumn cupcake recipes!

Have you tried beer in a cupcake before?

Check out our other Autumn cupcakes

Pin this recipe to make it later: 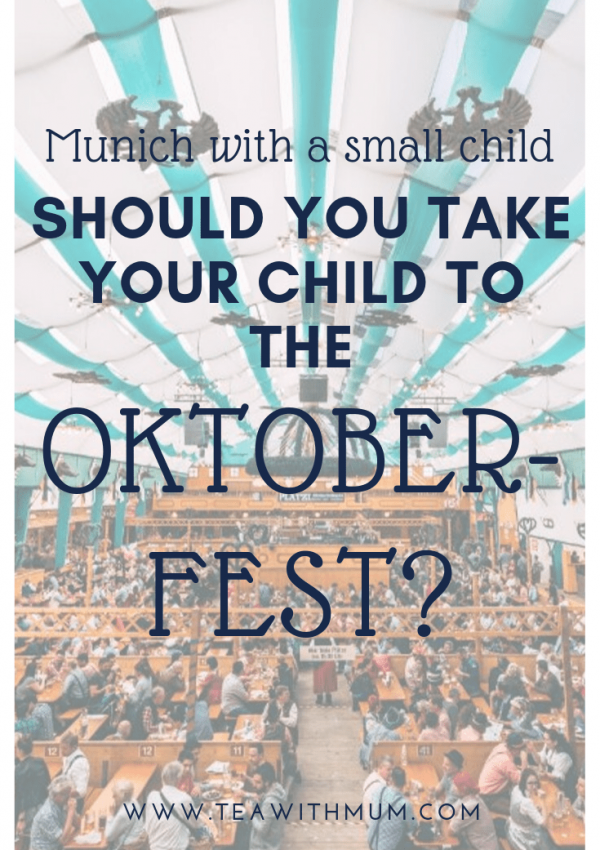 Should you take a child to the Oktoberfest

How to make German black and white Christmas cookies

Ultimate Dubai: 13 amazing things to do in Dubai with kids