I may be showing my age, but when I was young, no birthday party was complete without fairy cakes. These fairy cakes with crushed raspberry cream are so easy to make that a child can make them with minimal assistance. At the same time, the raspberry cream and the vanilla elevate them from normal fairy cakes and make them something special that could grace any afternoon tea tray.

The recipe is based on one in “Modern Classics Book 2“ by Donna Hay (HarperCollins, Australia, 2003). In the Donna Hay version, they are not fairy cakes, but the base recipe is the same. I have a few tips for you, too.

What are fairy cakes?

Whether or not you decide to fill these fairy cakes with crushed raspberry cream, you should save this recipe to Pinterest or whether you save your recipes.

BTW: You can follow us on Pinterest so you don’t miss any other fantastic Tea with Mum recipes: try https://pinterest.de/teawithmum.

Why should you take note of it? This recipe is a busy Mum’s dream. It really is a ‘throw it all in the mixer and press start’ recipe. No separate creaming of the butter and sugar. You don’t have to sift the flour (though I normally just sift it straight into the bowl). The butter does not even have to be room temperature – just leave it out of the fridge for about 10 minutes.

This ‘all in one bowl’ approach also makes these fairy cakes with crushed raspberry cream ideal for any budding bakers who wish to try their hand. You might need to read the recipe, provide the right measuring cups and check for bits of eggshells, but the rest they should manage themselves.

Of course, it also means less to wash up afterwards.

Like our moist chocolate cupcakes, this vanilla cupcake base is also a great staple to have in your armoury. It is a simple, yet delicious cake with a clear vanilla flavour. It works great with fruit or chocolate toppings and frostings, as a base for funfetti cupcakes, or with a simple icing and candy decoration for kids. Of course, these fairy cakes are still the quintessential children’s birthday cupcakes.

Quality is the key

Some bakers swear by quality ingredients, organic where possible. The argument is that you get what you put in.

I agree with this statement for three ingredients:

In this recipe, the quality of the vanilla makes a difference.

This recipe is supposed to make 12 cupcakes. However, I often find that it makes 14. Instead of wasting the rest of the batter, I make the cupcakes.

At some stage, very long time ago, I read that you should put about a centimetre of water in any empty ‘cups’ remaining in the muffin pan. It apparently promotes even baking and keeps the tin from warping.

Personally, if your tin warps, it is probably a good indication that it is time to get a new tin. I’m not sure that there is actually any scientifically-proven benefit of the water, either.

That said, where there are only a few cupcakes in a tin, I do add water to the empty cups. I have a feeling that it helps the cupcakes rise and colour more evenly. This may be me just trying to convince myself that it is worth the effort.

Fairy cakes are the quintessential kid’s birthday cupcake. These fairy cakes with crushed raspberry cream are simply delicious. Even better, they are so simple that your aspiring baker can do most of the work.

The vanilla cupcake is also definitely one to have in your arsenal – it’s so versatile!

When will you bake them?

Just a thought: Are you planning a dinosaur-themed birthday party for your little one? You could label these fairy cakes with crushed raspberry cream ‘Dilophosaurus cupcakes’ or ‘Corythosaurus cupcakes’. The ‘wings’ on the cupcakes resemble the head crests on these two dinosaurs. Easy, delicious and on theme!

New in our Resource Library 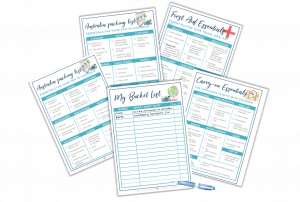 See what we’ve got brewing

I’m Rachael and these are my chats with my late Mum over a cup of tea. Help us make your life easier with tasty recipes, easy craft ideas, home hacks, parenting tips and travel hints, tricks & itineraries. Come share our adventures and take time for tea.

We use cookies to ensure that we give you the best experience on our website. You can opt-out, but if you continue to use this site, we will assume that you are happy with our use of cookies.AllowDisallowPrivacy policy
You may revoke your consent to the use of cookies.Revoke cookies