My mother-in-law has lived in this area her whole life. I knew which traditional recipe I wanted to make to go with our Cologne post, and I knew she would be the right person to ask. So this is Miss M’s Oma’s recipe for Reibekuchen: German potato pancakes.

She has been making this recipe for so long, she just makes it by feeling. So when I asked her for the recipe, she actually went and found me some old recipe books so that I would have the amounts I would need. The first was a book published in 1939 about cooking with electricity – “Das elektrische Kochen,” which probably tells you something. The one that I used was new the year she got married: 1968. It’s called “Das große Kochbuch” or “The Big New Cookbook”.

Reibekuchen a traditional dish served in the Rhineland and other areas of and they are often sold at fairs and carnivals. I had some just this weekend at the Zöppkesmarkt. They are getting harder to find, though, due to new fire safety restrictions.

Reibekuchen served crispy and golden with apple sauce (normally there are three to a serving).

My mother-in-law grew up eating them with Apfelkraut, a highly concentrated form of apple sauce that is also a traditional food from the Rhineland. She still eats them this way. Her father apparently would eat them on rye bread with the Apfelkraut.

You can also find the German potato pancakes at fairs served with sour cream and smoked salmon.

Sometimes – and this is how I served them tonight – they are served with pork dishes, though crispy Bratkartoffeln (fried potatoes), Spätzle (an eggbased pasta from the south of Germany) or Knödeln (dumplings) are more common.

We had roast pork with Reibekuchen, apple sauce, sautéed snow peas and a creamy sauce with oyster mushrooms and bacon. Miss M, our picky little eater, ate her Reibekuchen and apple sauce, but would not even let me put the rest on her plate.

They are also a great alternative side dish for Christmas or Thanksgiving Dinner.

There are a number of alternative versions of this recipe for German potato pancakes.

You can substitute the flour for semolina or polenta or another type of flour in the case of allergies.

Some recipes also suggest substituting the grated onion for grated apple. This, of course, makes the potato pancakes sweeter but means you don’t need any apple sauce.

The recipe I found in “Das Kochen” also suggested boiling about one-third of the potatoes before adding them to the mix. This makes the Reibekuchen slightly “creamier”. My mother-in-law said not to worry.

Whatever you do, there are two things you need to ensure:

Are you going to serve your Reibekuchen sweet or savoury?

Reibekuchen, or traditional German pancakes, are an easy-to-make meal or side dish. They are delicious served with apple sauce or Apfelkraut, or as a side dish with roast meat: the perfect recipe for Autumn.

How are you serving your Reibekuchen? 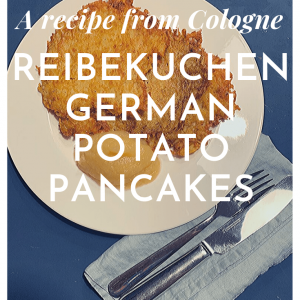 These traditional potato pancakes from the Rhineland area of Germany are not only easy to make but can be served as a sweet dish or a side dish.
Print Recipe Pin Recipe
Prep Time 10 mins
Cook Time 30 mins
Cuisine German
Servings 2 -3 persons

In the case of allergies, the flour can be changed to semolina or polenta. One alternative is to add 2 tablespoons of sour cream and some more flour to the batter. One recipe suggested cooking about a third of the potatoes in advance to give the German potato pancakes a creamier consistency. Another alternative is to replace the onion with half an apple, grated. Simple canola or vegetable oil works better than olive oil for this recipe. I prefer a mixture of canola oil and butter.

How to make delicious Berliner doughnuts