When I was out at our local dm the other day, I found some mini Gugelhupf forms. They were so cute and cheap, so I had to have them. Of course, then I had to work on a recipe that would use them. I wanted something fresh for spring. Mini orange Gugelhüpfe were born!

dm is a German “drug store” franchise. According to the company’s website, dm has around 3,500 stores and nearly 60,000 employees in 13 countries, making it the largest drug store company in Europe (in 2018). My Gugelhupf forms are the brand Profissimo and there are only 6 in the pack. However, there are numerous mini Gugelhupf forms available online.

I hate using silicon baking forms. Years ago, I had a bad experience with a silicon form. Truth be told, I have avoided them wherever I could since.

Overworked, over tired and somewhat stressed, I was home late from work and had to make a cake for some event the next day (my secretary’s birthday maybe?). I had a silicon form with “happy birthday” of something on it that I had promised to use for the first time. After buttering the form carefully, I poured in the batter and put the cake in the oven.

I remember standing in my kitchen in Brussels in tears when I took the cake out of the oven. Despite my best (tired) efforts, the cake had stuck and fell apart when I took it out of the pan. About half of it had to be scraped out and the letters were totally illegible.

I think I eventually managed to salvage most of the cake. I vaguely remember using cream, custard, raspberries and some Bailey’s Irish cream. If it was a trifle, it was deliberate, right? I kept crying while I was making the custard. By the next morning when the custard still had not set, I was beyond caring and tears.

Still, I cannot believe that I was voluntarily going to use silicon forms again!

My advice to those of you who have not used silicon forms before: make sure you butter the form EXTREMELY well. Don’t miss anything. And flour the mould well after you have smeared it with butter. Preferably: Don’t use them when you are feeling tired and stressed.

Why are they called bundt cakes? Apparently, a group of German women approached a local manufacturer of Scandinavian bakeware to ask if the company would recreate a Gugelhupf pan. In Europe, these pans were traditionally made of cast iron or thick ceramic and were too heavy to take with them when they left for America.

In German, an association, society or group is called a Bund. Therefore the pan is most likely named after women’s society that asked for it to be recreated. In fact, in certain areas (like the Palatinate region of Germany) the Gugelhupf is called the Bundkuchen, or association cake.

The Palatinate, of Pfalz is the area of Germany that incorporates Mainz, Ludwighafen am Rhein, Koblenz and Trier. It shares borders with Belgium, Luxembourg and France. Perhaps this is where the ladies in the association were originally from.

And the ‘t’ on the end of Bundt cake? Perhaps it is for the patent, or because Germans often pronounce a ‘d’ more like a ‘t’. Whatever the reason, bundt pans have become a fixture at most large gatherings in America.

The mini Gugelhupf forms I purchased came with a recipe. The recipe sounded rather bland and dry, but it gave me some idea of the amount of batter I would need.

I added the orange peel and the glaze, and adjusted the sugar levels a little so the they were not too sweet.

The ‘syrup’ in these mini orange bundt cakes makes them incredibly moist and just perfect for spring. They were even still moist 2 days later (with nothing but aluminium foil over the top, they weren’t in the fridge or even in a container). Even my MIL complimented them – and she normally comments that what I have made is very “maechtig” (strong).

If you prefer, you can swap the orange for lemon. These mini orange bundt cakes would still be delicious and moist. No need for cream or ice cream! If you want something on the side, ours were great with fresh raspberries.

Looking for something to make for Mothers’ Day brunch or afternoon tea? We had these mini orange Gugelhüpfe for Easter, but they would be perfect for your Mothers’ Day table – so easy and light. They even have the seal of approval from my Mother-in-Law!

Have you made mini orange Gugelhüpfe before? Or any mini bundt cakes? Why not try these for your next brunch? You can even use the forms to freeze ice cream. 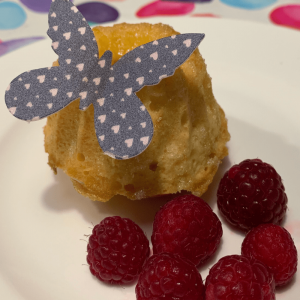 To ensure that your Gugelhüpfe don’t stick to the forms, make sure you butter the forms very well and dust them with flour. Remove the Gugelhüpfe from the forms as soon as they have cooled enough to do so.